Hello Everyone, Just clocked a little over 1300 miles on the car after owning it for 3 weeks.
This morning I was able to replace the Stock Turbo Inlet Pipe with the O34 Motorsport "3 inch" And rubber inlet Tube. I will be keeping the Stock Air Box for the time being however I did replace the stock air filter with a Drop in filter. I do have the APR Carbon Fiber ( Whistle) Intake from my previous car, Still debating if I keep or sell it... More updates as I slowly continue on this build. Waiting for my NGK racing spark plugs and Coil packs to arrive. Then going for stage 1 Tune. 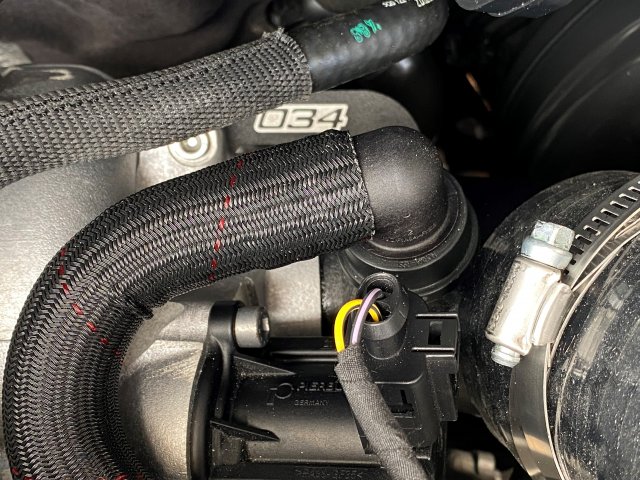 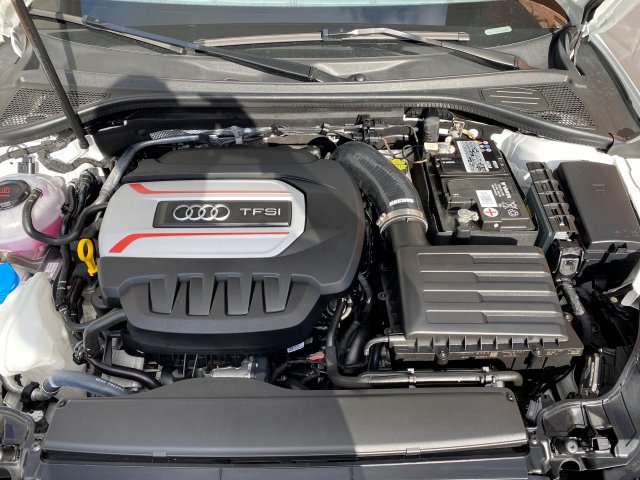 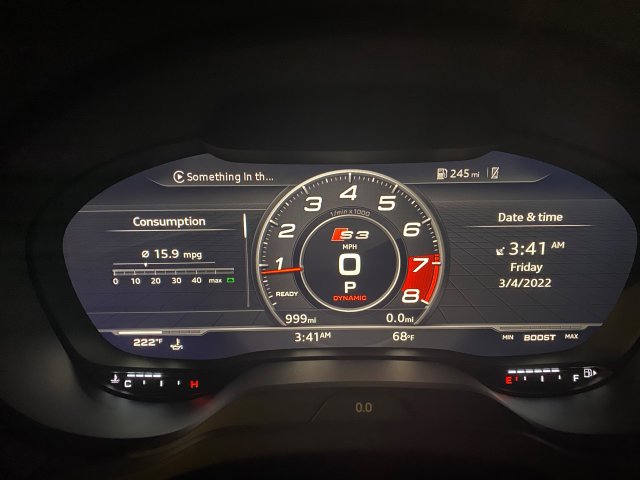 So envious of the virtual cockpit. My engine hasn't looked that clean for several years haha.
OP

Quick Update:
Found the APR Carbon Fiber Intake for a very affordable Price (dummy if I didn't buy it)
Decided to guy with small detail adding the Gold underneath the Filter. ( comment Below thoughts idea)

Overall The intake simply just makes the engine bay look nice.
Perfomance wise: No difference at all basically all noise. 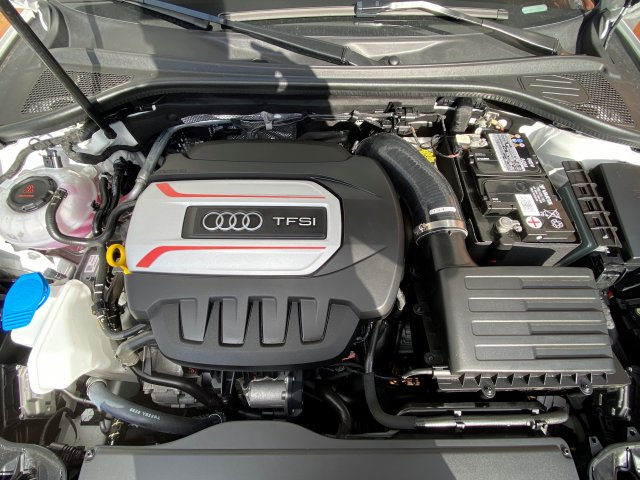 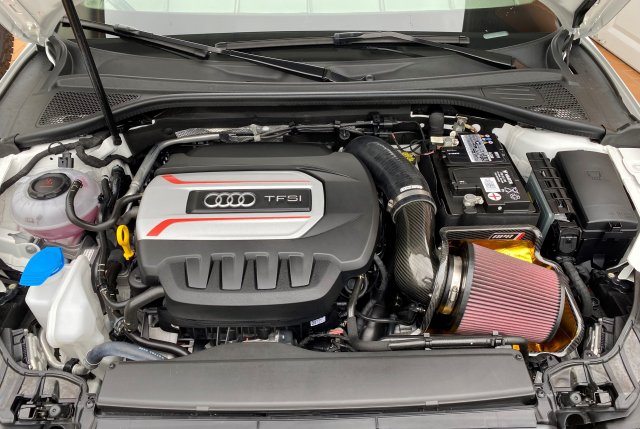 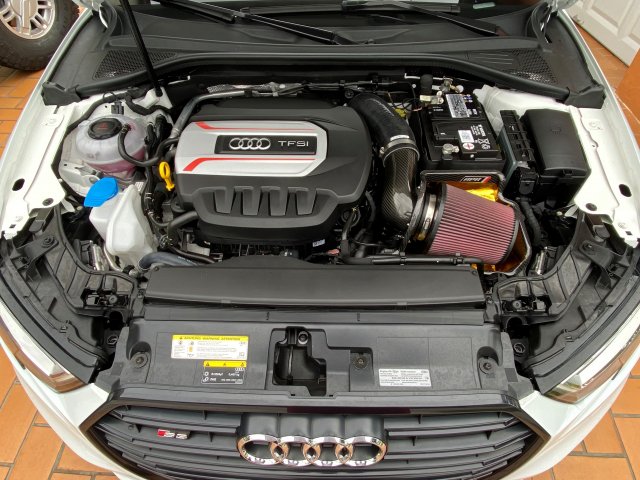 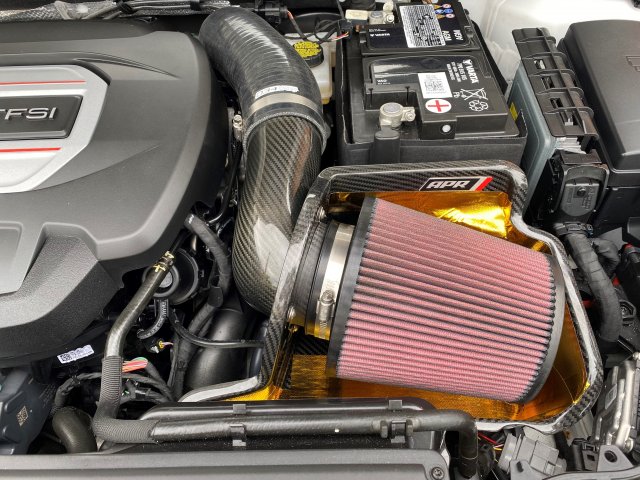 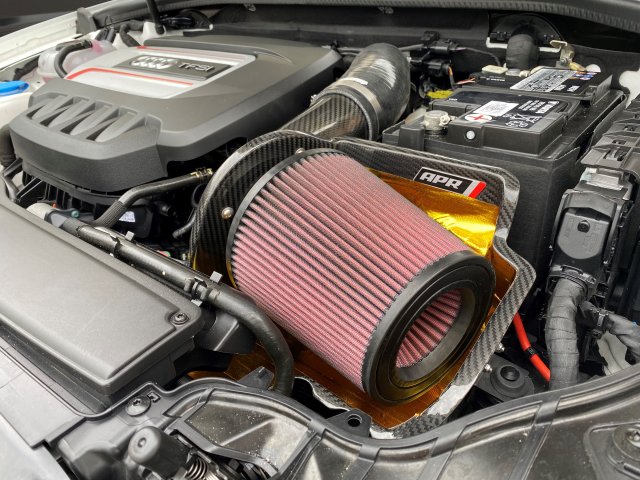 Quick Update:
So I decided to go with the COBB Access Port and uploaded the Stage 1 tune and DSG tune ( sport).
The car feels a lot more responsive than stock
but still has some lag on mid 4th gear which is due to the base map.
My plan is to keep the stock map till the car reaches 6,000 Miles then get a custom tune on E85.
Although with all these Emission regulations I don't think I will be putting a downpipe which is the main key to making power on these motors.
Overall I can't get enough of this car and how much fun it is to drive. 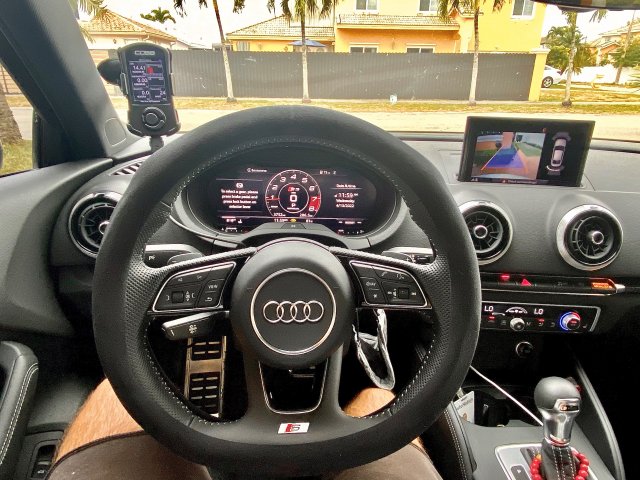 i just got a custom tune on the cobb ap. you should do it. its not that bad for the price from most tuners. i had no choice but to get the remote tune.

92683 said:
i just got a custom tune on the cobb ap. you should do it. its not that bad of a pice from most tuners. i had no choice but to get the remote tune.

where did you get the custom tune, I have been debating for the past couple of weeks on What parts to buy and who to get tuned by.

i got it from a local tuner. i would not recommend him. he lacks customer service, as in keeping up to date with my emails and contacts. even his office worker says he lacks it. the tuner is also the owner.
the tunes are better than off-the-shelf maps but definitely could be way better if he would just be more off his azz with the work.
the tunes i ask for are to make sure i get the best mpg and then max out the power gains.
so far the mpg is much better. im netting around an extra 70-90 miles more on a tank of fuel.i did pay for a second map that allows me to run 87oct. for those days i need to cut back on costs. i haven't tried it yet since he has not responded back to me with my new updates of how the map is working.

once i finish ill post up the location name but don't go there. try elsewhere since its all remote tuning now. if i had known i wouldn't have gone there.

i only have the downpipe. worth the fun but the hassle is there and they are not allowed to turn off the cel. the dp has some fun aspects. the sound. its really fun to rev it hard. it creates a fun factor that you want. nothing annoying like an aftermarket muffler would create. it does allow better flow but even with the stock turbo its way over the top for power. more flow than the turbo seems to need.

again, never had an issue with more air so an intake will not be needed. the only thing i can tell you that would net you more power is to reduce hot air. so the short ram intake that these mnfg sells are reusing hot air from the engine bay. the stock intake is the best so far, still pulls in air from outside the engine bay. if there is an aftermarket one that is a real cold air intake i would go for one of those as well. it will pull air from outside the engine. these engines don't need more air so much as they need cooler air.
as advice, i would put back the stock intake box. unless you enjoy the sound then keep it but you would be giving up some hp on the table if you do keep it.


when i was doing data log runs, we are watching for knock. hot air creates horrible knock in these engines. it makes it so that the engine will reduce ignition timing which will rob you of power. and yes i know that using e85 and such will band-aid the problem but i don't believe in doing that. its such a waste of money and time. i would rather save that extra money and get steady stable power like a new turbo or other parts. those will give you more reliable power.

so find parts that will reduce the knock. 3 items come to mind and 1 maintenance. these aftermarket parts are way better as it may have either a larger capacity or have higher flow than stocker. also most often the quality will be better too.
1. intercooler
2. radiator
3. front two supporting coolers. located on the left and right of the front lower part of the car.

maintenance process.
1. clean the engine of carbon. aka carbon cleaning the valves.
this is a huge issue with our engines. if you are past 50k miles since your last cleaning or of age, clean it. it makes a huge difference. even if it doesn't look bad when you open it up. clean it. any little bit will cause issues with power, mpg, and any other related problems.
i would have to say its near on the top of my list to do every 50k. get a good set of tools and keep it handy. learn to do it as its should be a regular maintenance service.
Last edited: Jun 6, 2022

BrilliantS3 said:
So envious of the virtual cockpit. My engine hasn't looked that clean for several years haha.
Click to expand...
but he isn't able to lower his center screen like the pre models can.

i wanted to also add that many people forgot about maintenance. oil seems to be the only thing that everyone concentrates on but the other fluid changes are also vital.