What I Drive
Audi S3

So I have the multi safer and I tapped into the F38 slot for constant power and ground it to a bolt yet the cig lighter does not work. Anyone know why?
9

so I'm always into new stuff and I thought whats new for 2017 for dash cams.

it seems that a new product is getting popular.

the reviews online are pitting this new model against the already popular blackvue.

Regardless of which camera you choose, I have the BlackVue front/rear system in my car, I think it is a smart move in today's society with people texting and dialing when they should be driving. The extra protection of a recording when you get hit is well worth it to me. BTW, I really like my BlackVue.
9

I agree we should start having one, but ever since I am aware of this device I started to notice who actually has them on their cars. now after looking more in depth at which cars have them I noticed more about the drivers.

seriously I wish I had the cameras to capture the ones who have these cameras.

what I noticed is that these drivers are actually more aggressive than other drivers. about 10 out of 10 times the people who are wreckless on the road, Ill see a camera on their dash or even on their helmets (motorcycle riders). these people are really asssholes when they are on the road. the non camera people are just random a-holes but the camera owners are just weaving in and out of lanes, speeding up and cutting off everyone they can. I have yet to see a random camera driver, drive calm and respectful. I'm not sure what they are thinking but I can assume if they are the cause of the wreck the cameras will definitely wont be part of the evidence.

normally I wouldn't notice the cameras but after they drive so dangerously, I had to take a look at who is driving or riding and I see a camera right there on the dash and on the helmet I see the go pro on top of their heads.

so I would say for the most part I need a dash cam to capture the dash cam motorists/riders and occasionally the others.

Broad generalization that I happen to agree with. I am a wait my turn, stay in line commuter. I have been rear-ended 5 times in the past 18 years sitting in almost stopped or stopped commute traffic by asshats on their phones or texting or playing with their radios. That is why I got the in-car camera system. But I notice that most of the camera users are the ones driving rather aggressively. The motorcycles split traffic at pretty high rates of speed - like traffic is doing 55 and they are splitting at 75. Recipe for becoming awn organ donor for sure. Still, I prefer to have some protection from the idiots who rear end me and try to blame something/someone else.
9

wow 5 times. dang. you need a siren along with the camera for sure or a built in lawyer in the car. lol

funny thing is that my GF also recently got rear ended while sitting at a stand still on the biggest parking lot called the 405fwy, socal cali.

it was a three car incident. the last person who caused it looked like she was about to just take off on the shoulder. she didn't wait for the two she hit so they could follow. because most drivers just pull over and wait but this one made a quick dash to get off the freeway. since she was heading off to the shoulder (traffic was just sitting) everyone thought she would stop and the other two got out of the car to see the damage before moving. well my gf saw her just take off so she got in and ran after her. the guilty one had to stop at a red light at the off ramp and my gf honked at her while catching up. she finally pulled over at a small complex down the street. she said she was trying to get off the freeway. wtf??? yo, people move to the shoulder and not off the freeway completely. and you don't take off like you just robbed an old lady.

well the cops came and took care of it but a camera would have been a really good safety net for this situation as if it wasn't for my gf's quick actions the runner would have escaped. I don't think I would have been quick to take action like that myself and would have been left with the bill. the middle girl was super slow to react and was last to catch up. so she wouldn't have been helpful at all if the other one made her get away.

in my mind, who does that? running away from an accident scene where everyone saw your car. oh well that's just me, I could never do a hit and run but the runner sure got balls for a woman!

now for those bike splitters, I assume there was a good reason for that option in the law books in the past but I don't know if that rule applies anymore because of all the traffic now, in addition to the crazy riders who do what you mentioned. some rules don't seem to make sense to me such as splitting lanes. rules are to help everyone be safe towards each other, right! so splitting lanes can hurt the biker, but also they can hurt anyone else he slams into. yet, no new rules to stop it. on the other hand there is a rule about seat belts, which if you don't wear one it only hurts yourself. personally if I want to get injured all by myself it should be up to me and not the government because ill be going through the windshield on my own. I can kind of figure its all about money but that one is vague to me on why.
Last edited: May 14, 2017

F38 has constant power and F48 is for ACC power. Click to expand...
[MENTION=2]S3Fan[/MENTION] could you please do a write up on your dash cam integration? I want to get one myself and could use your help!
I'm in the process of writing up a whole guide to use OBDEleven on our cars and can't wait to share it all with you guys. I just need to find more time!

ScoobyS3 said:
[MENTION=2]S3Fan[/MENTION] could you please do a write up on your dash cam integration? I want to get one myself and could use your help!
I'm in the process of writing up a whole guide to use OBDEleven on our cars and can't wait to share it all with you guys. I just need to find more time!
Click to expand...
Yes sir, I'll post more details.

ScoobyS3 said:
[MENTION=2]S3Fan[/MENTION] could you please do a write up on your dash cam integration? I want to get one myself and could use your help!
I'm in the process of writing up a whole guide to use OBDEleven on our cars and can't wait to share it all with you guys. I just need to find more time!
Click to expand...
I expanded more details on my original write-up. http://www.audis3.org/forum/threads/501-Audi-S3-Dash-Cam-Installation-Guide

Feel free to post questions and I'd be happy to answer.

Yeah, I hate to generalize, but I see probably 1 hit & run every couple of months during my commute. It has always been some POS car that's already dented up with damage all over. Likely an unlicensed and uninsured driver to boot. Those are the types of cars that hit and run in my experience. They need to be thrown in jail when apprehended. Your girlfriend was certainly brave for going after the escaping hit and runner. Even when you find the car after the fact, proving who was driving is a hurdle you have to clear too. The camera offers the best chance of doing that.
C

Wondering if I can get some help. I just got a Viofo A129 Pro Duo and am hardwiring it to my 2017 S3. I followed the recommendations here to use F38 for constant and F48 for ACC power as they were both unused fuse positions on my S3. However, when I test my dash cam, there is no power. Not sure what is causing the issues if these Fuse positions are constant and ACC as stated. Any help is appreciated. 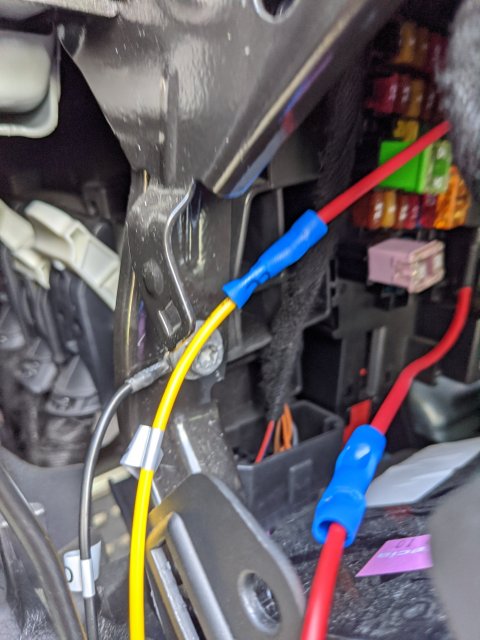 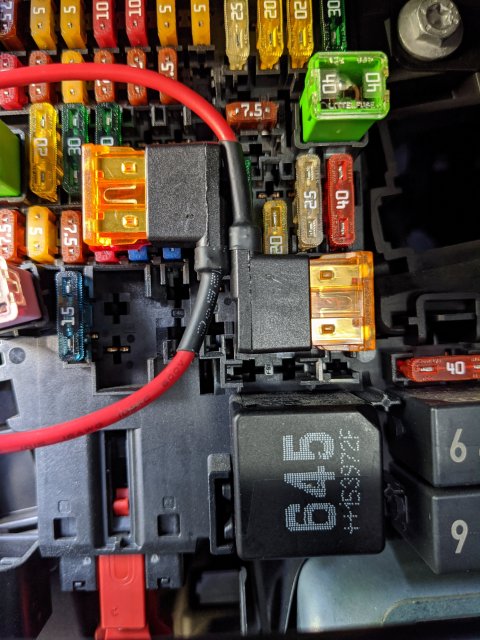 im creating a fused oem accessories wire for anything i need that needs fuse tapping. using oem wires and custom connectors for repetitive changing and additions. still waiting on tooling to make it happen. so many little projects in the works.
U

Having read through the thread start to finish I felt it would be useful to point out one perhaps important addition. When there is a fuse location in the fuse box that is empty 'due to the exact optioned version of your own car', there is often no leg connector in the back of the box for where 'one' of the two fuse legs would slot in. This is why when some here have discussed using a previously unused slot (rather than taking a used slot fuse out and using the piggy back type connectors supplied with many dashcam hardwire kits) they seem to get no power at all, under any ignition key position circumstance.

The options then are to a) use a fuse location where there is already a fuse in place and to support this you would use a piggy back type fuse adaptor that comes with many of the dashcam hardwire kits, or from an auto accessory store, or b) if using a fuse location that has previously always been empty, make sure that you can see shiny metal to indicate there are connectors for where 'both' of the fuse legs will slot in.